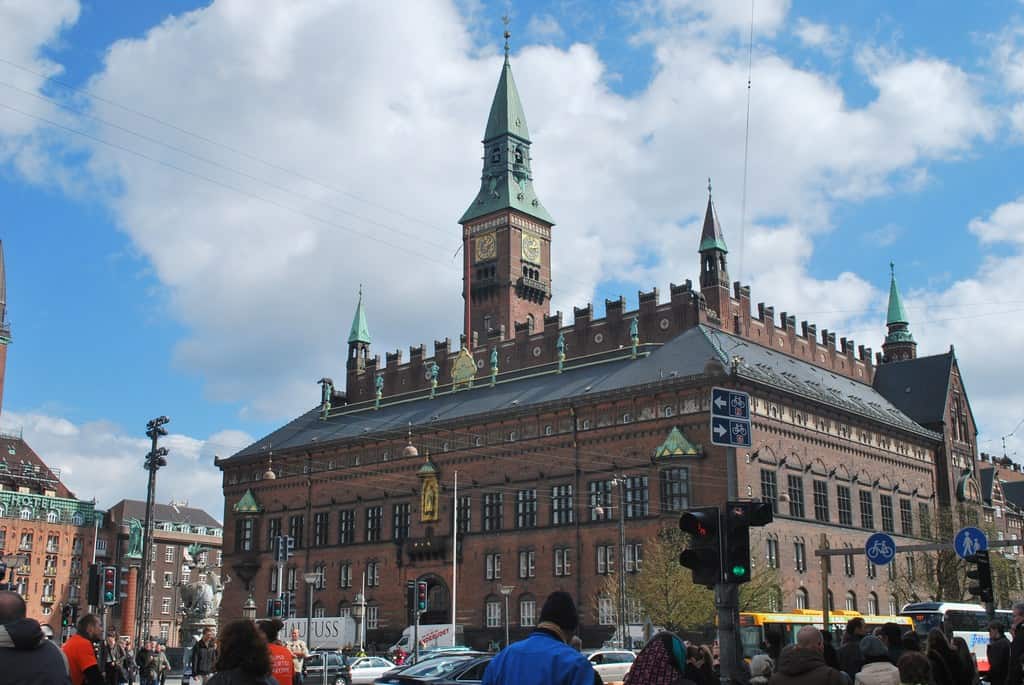 We recommend walking from Copenhagen Central Station. From there it’s only a 5 minute around Tivoli past Hard Rock Cafe, and you are there. You can’t miss it.

The current Town Hall is the sixth in the line of different buildings used as the seat of Copenhagen’s local government. The first one dates back to 1200, with an to this day unknown location. The others have either burned down during the Great Copenhagen City fires, or just stopped being used over the years. The one we have today is designed by Danish architect Martin Nyrop, who have also designed some other significant buildings in and around the city.

Work began in 1892 after the design of the winning Architect had gone through two competitions before it was accepted. From 1896 where an old Danish tradition, the topping-out ceremony was held, to 1905 more and more work was completed and at last the new Town Hall could be used to it’s full purpose.
The Town Hall Hall is a symbol of Danish architecture when it’s best, with the brick stones, the wood and the highest tower in Copenhagen all forms one of the town’s great landmarks.
Visit the daily guided tour at the Town Hall at 15:00, Saturdays 10:00 with Sundays closed.

Above the main hall’s entrance doors, central in the building, in honor to the city’s founder Bishop Absalon – a golden statue adorns the Town Hall and has done so every since the 700-year day in 1901 of his death, back in 1201.
Rising high, over 105 meters in the air, and ever since it’s initial ringing with the bells over 100 years ago, the Town Hall’s clock tower has played it’s significant chime every noon and every New Year – and also been used in the daily news, with an additional normal ringing during the hour.
Monday – Friday you can go on a guided tour up the 300 stairs to the tower at 11:00 and 14:00. Saturday it’s at 12:00.

The square that never sleeps, some calls it, with life buzzing from either the thousands of cyclists, cars or pedestrians almost around the clock. The two big roads, Vester Voldgade and Hans Christian Andersen’s Boulevard cuts through Copenhagen and streamlines the traffic very efficiently.
Dating back to 1760 when this square was first used, until when the new seat of the local government was moved to it’s current location in 1900, this plaza has become the central square in Copenhagen. Back in the days the tramways intersected the location, and planned for 2018 is a new Metro station, which will connect the city to a whole new level.

With it’s location so close to both the Central Station and right next to Tivoli and Strøget (Stroget), a lot of people pass through this square – and use it for a series of other things as well. Ever since 1992 when the Danish National Soccer team won the Europe Championship, the winners of a sports event have been celebrated from the balcony of the Town Hall, quickly filling the Town Square (Rådhuspladsen). Also at New Year’s Eve you are sure to run into a party here!

has both a boulevard named after him, and has a statue placed right next to the City Square in his honor during 1954-61. This Danish author and fairy tale writer known for pieces as “The Ugly Duckling“, “The Nightingale“, and “The Little Mermaid” among others, truly deserves a note for himself. Hans Christian Andersen’s tales have been translated into more than 150 languages, and are known to have inspired a series of other artistic features such as plays and movies.

Because of his big influence in modern writing, Hans Christian Andersen also has another statue in his honor – The Little Mermaid on Langelinie has also been raised for this great Dane. While visiting, be sure to pay a visit to Hans Christian Andersen if you’ve loved his books, and want to honor his memory.
Cities like New York and Chicago in USA, Shanghai in China and a few other cities all over the world have also raised statues and memorials over this Danish author, who have touched the life of so many both children and adults worldwide.

A known motto of his was the phrase: “To travel is to live”, and he sure meant that – with more than 12 years of his life spent intensely traveling and being in Denmark, and with a total of 43 years spent respectively being home and abroad, Hans Christian Andersen got a lot of his inspiration for his fairy tales and stories from his time overseas.

At Nyhavn, you can see a few of the houses that Hans Christian Andersen lived in, during his years of staying in Copenhagen.