Langelinie is a beautiful place in Copenhagen; it’s a port route located on the waterfront of Østerbro district in Copenhagen, not far from the city center. Originally Langelinie was a boardwalk that used to go all the way around Kastellet and in to the shoreline along the current Strandboulevard. The promenade was part of the military fortification of Copenhagen back in the days of conflict in Scandinavia, and regular people were not allowed to enter.

In 1848 the absolute monarchy was abolished and the area became open to the public. Today Langelinie consists of a park on the outer surface of Kastellet, a promenade and a marina on the 1 kilometer long pier that forms Langelinie. This pier was established in 1894, and is often today visited by big cruise ships and naval vessels, which stops in Copenhagen on their cruise or just for military business, such as exercises or drills.

We recommend walking from Østerport Station (get there by S-train or busses). From there it’s only a 5 minute walk – follow the signs that says Langelinie and ‘Den Lille Havfrue’ to the left when you get to street level. You can’t miss it.

On the pier, there is a long building along the street named Langelinie Allé. For many years these buildings were used for depots and storage, and was not very attractive to go nearby or for anyone to use them for personal use. Today it’s been re-arranged with shops on the strip, mostly fashion and souvenirs. The shops are mostly outlets and you can get a good bargain on the various items for sale. For example the Danish brand “NOA NOA” is normally very expensive clothes, but in this outlet you can get women’s wear and children’s wear on sale all year, with a lot of percentages to save.

Besides shops with all sorts of outlet clothes that aren’t the newest of newest in fashion, you can find nice and cozy cafes where you can have lunch or dinner – or maybe even a cup of coffee, and lastly seeing us Danes love out ice cream, we of course have shops to purchase that so you can enjoy the cold piece of heaven on the bulwarks of the pier

The Little Mermaid on Langelinie

The Little Mermaid is mostly what tourists associate with Denmark, and that makes it the most famous and well-visited sculpture in Copenhagen – and even in the whole country. The Little Mermaid was made possible from funds by Carl Jacobsen (who was interested in culture and sculptures – see Ny Carlsberg Glyptotek) and he got his inspiration from Danish autor and fairy tale writer Hans Christian Andersen.
Because of his lack of skills in sculpturing, he appointed Danish sculptor Edvard Eriksen to design the Little Mermaid, which was finished in 1913.
The Little Mermaid has been vandalized a couple of times, where two of the incidents were of a more ‘serious’ note. She was decapitated, and the Danish Police almost reacted as if it was a regular homicide-case.

Recently she was transported to EXPO in Shanghai together with the Danish Pavilion (designed by Danish Architect Bjarke Ingels Group) and while she was gone, screens were set up to follow her live with webcams around the world.

However, the Danes living in Copenhagen are not that into the Little Mermaid and we hope you don’t get to disappointed if you go visit. She is in human size and is not that exciting, but if you go to Langelinie anyway, then go down to the water’s edge and get the mandatory picture with you standing next to her!
Or else you get to see her from the canal tour. 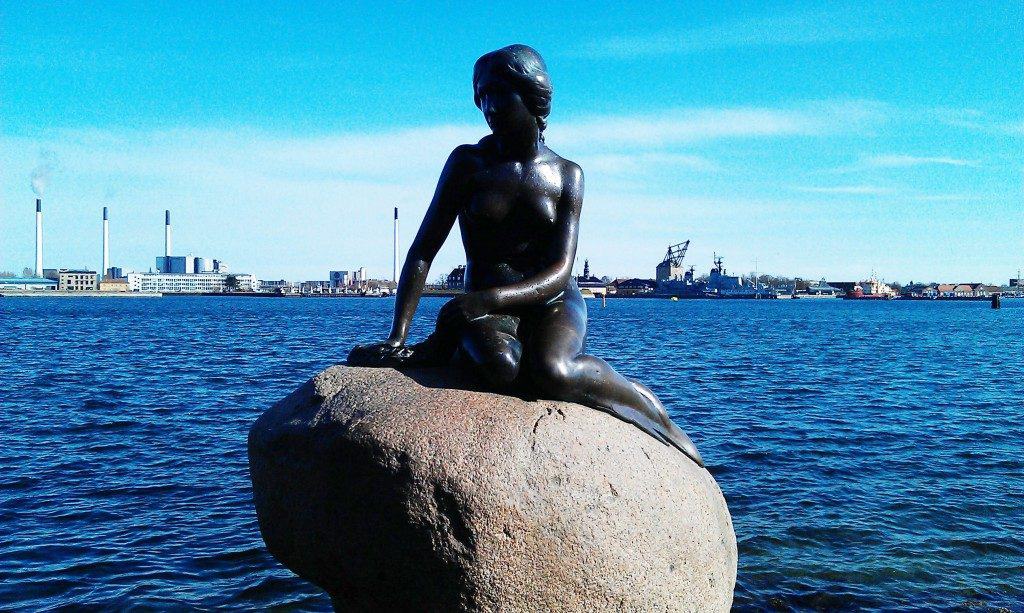