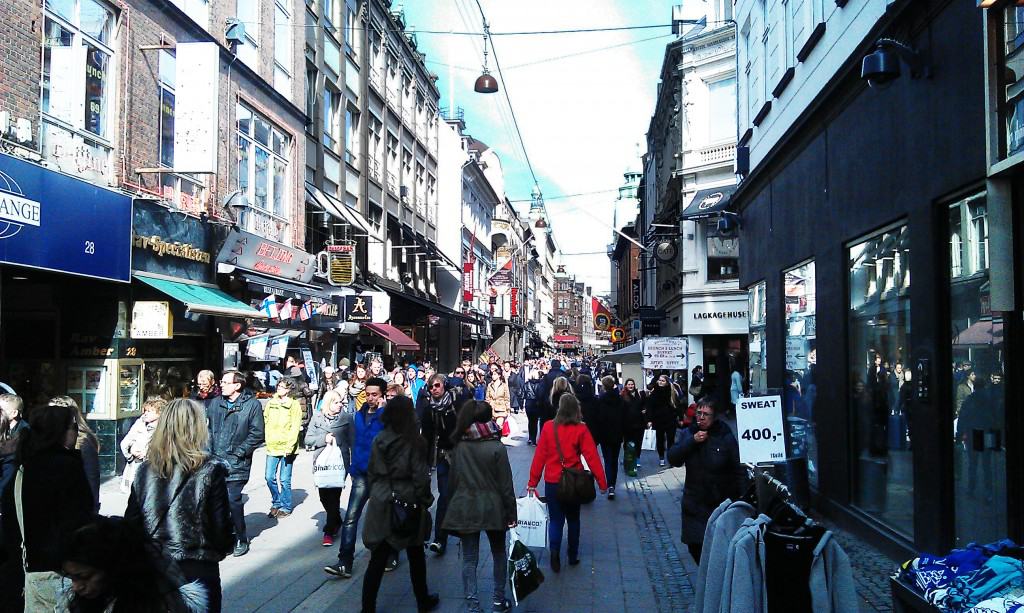 We recommend walking from Copenhagen Central Station. From there it’s only a 5 minute around Tivoli past Hard Rock Cafe, and you are at the Copenhagen Town Hall Square – from there follor the masses. You can’t miss it.

is a shared term (or name) that covers the central shopping streets in Copenhagen. It’s one of the longest (and most beautiful in our opinion) pedestrian zones in the world, and it’s the ideal street for a day of shopping in Copenhagen. It starts at Rådhuspladsen (the Town Hall Square), and a little over half way down, it splits into two branches which ends at Nørreport Station (on the way to Nørreport Station down Købmagergade, you can also find Rundetårn (The Round Tower), and the most expensive shops Kongens Nytorv. In this end you can find shops like Louis Vuitton, Gucci, Lacoste and so on.

Today it’s the unofficial center of the city, with people everywhere you look – either hanging out, relaxing, on their way to work, shopping, or enjoying a lunch or coffee at the nearby cafes. A lot of people also use it as a meeting point. This street is always crowded with people, and all the talented street performers are ready to entertain you – some of them are rather good actually, but as in every other city around the world, you can also encounter some of the more devious-minded types. So stay away from people who seemingly win money from random games, on a make-say stands with a group of similar-looking players – with almost certainly one of them scouting around to look for the police. Just a word of advice, they will rip you off.

When you get to the big mall Illum, you are at Amager Torv where “Storkespringvandet” (The Fountain of Storks) is. For many years it was said that the statues that decorates the fountain looked like herons and not storks. During the 1960’s a lot of hippies used to hang out here and smoke weed and play the guitar. Since it’s not looked well upon to smoke in public, they have left this place and hang out other places in the town.

Because these streets have been the main pedestrian zone through the city for many, many years, it has also seen many different events and activities. In the years 1500 – 1600+, Amager Torv (Amager Square) became the main site for knight tournaments and gigantic parties during the different Kings coronation.
The most important national event this street has seen, was in 1848 where a demonstration gathered thousands of people to end the Danish absolute monarchy, and substitute it with democracy.
It was not until the 1990’s before these streets was officially named Strøget (Stroget).

The shops on Strøget (Stroget)

are very different types and genres, with all sorts of purchasable items – it being everything from shoes, clothes, souvenirs, toys, music and film – there are also some eateries and even a tattoo parlor. So these streets can really meet your exact need when it comes to shopping.
To mention a few of the shops here on Strøget (Stroget), you can find a Lego shop, Nike, Adidas, Mads Nørgaard (clothes), Aldo – and many, many more! Also be sure to check out some of the side streets, where you can find everything from benches for a nice get-a-way, to special shops, small – nice cafes and restaurants.

Leave a comment if you want some recommendations for special shops, and we will get back to you with more information on what you are looking for: because there are simply too many different shops on Strøget (Stroget) to write about them all on this blog.