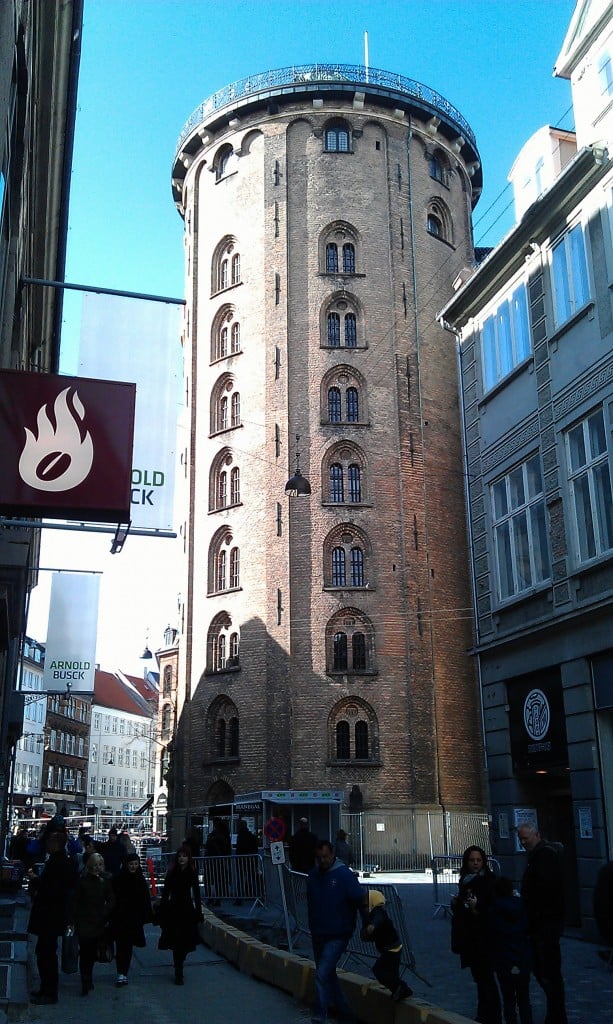 Is an iconic landmark of the many Copenhagen buildings, dating back to 1642 where the tower was finished. Never mind it’s only 36 meters rise from the pedestrian street below, it is still a good experience to stand in the platform at the top, and have a nice view over the inner city of Copenhagen.
At the moment a lot of working is going on around Rundetårn (the Round Tower), where they are changing the pavement. Unfortunately because of all the fences and signs, this building has seen better days. It will soon be over though, and everything will be restored to it’s former glory.

Rundetårn (the Round Tower) consists of two cylinders – one that serves as the spine of the building, and an outer one that forms the buildings facades. In between it all is a ramp that winds around the inner cylinder 8 times, which makes the total length of the ramp into 209 meters, before you reach the wooden stairs that will take you to the platform.

The way to the top does not consist of stairs (until you reach the final few meters), but a smooth ramp that allows horse carriages to transport people all the way to the top. No one really knows why it was built this way, but maybe it was to allow horses to transport building materials, books, or maybe the rich people of that time to – or just near the top.

Rundetårn (Round Tower) was ordered

and built back in 1635 on command of famous King Christian IV, whose eager (and money) formed a lot of the beautiful buildings that are still preserved in modern Copenhagen. Through times, the building has seen a series of events unfold at it’s feet and within. Example given was in 1717 where Russian Tzar Peter the Great rode up the slope to the top in his horse carriage (but if that was the original intent of the ramp, we still don’t know)
In addition to having a church in it’s backyard, which together with the tower and the University Library nearby was part of a Trinity, it also houses the oldest and best preserved observatory in Europe on the very top.

Today it is a so-called ‘Peoples Observatory’, where the common astronomy-interested people on given, specific times can watch the stars and planets through a telescope that magnifies from 80 to 450 times. It is very well visited though, so check availability and reservations on the website.

We recommend walking from Nørreport Station (get there by S-train or busses) – alternatively if you are close to the Metro, take that to Kongens Nytorv Station. From there, go down Frederiksborggade towards Strøget. You can’t miss it.

The entry fees are DKK 25 for adults, and DKK 5 for children, and it’s well worth a visit to the top – and can be combined with some of the various activities and displays that is going on in the different rooms.

Adjoined with Rundetårn (Round Tower)

is the Church of Trinitatis (Churc of Trinity), which was completed in 1656 (it’s 900 square meter ceiling was completed the year after), is a 50 x 20 meter church that is built in Gothic style. Today it almost stands as it’s original intent, after the renovation from the big city fire in 1728, where the church lost most of it’s interior and furniture. The church was originally intended for students of theology, but have over the years seen a change in regular users.

Today, the Church of Trinitatis in central Copenhagen is a normal church, where people get wed, children baptized, and of course hosts regular church services. Opening hours are Monday – Saturday from 09:30 to 16:30.