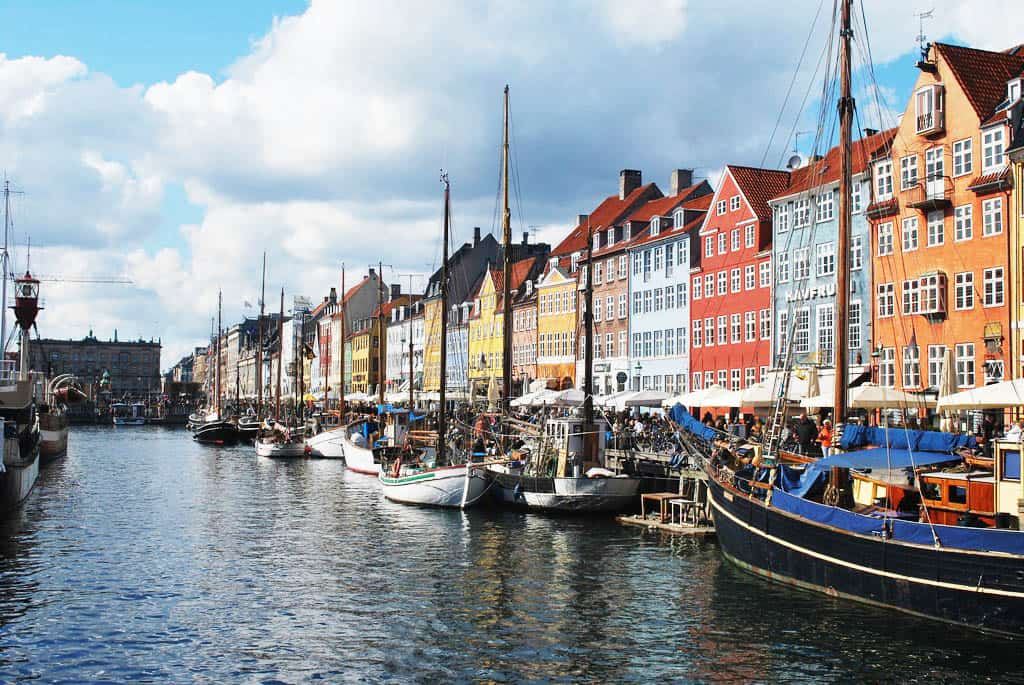 Is a favorite place among the natives, and attraction for the tourists when going to Copenhagen! Everyone seem to love this cozy area around the canal, with all the street cafes and the buzzing life of people passing by. Nyhavn have become more and more popular over the past 20-ish years, and it is one of the most visited places in Copenhagen! It’s a harbor district, and in the summer time it’s crowded with people. It used to be more of a murky place with shadowy taverns and prostitutes, but today it’s nothing like that; the old taverns, and sailor bulges are now transformed into nice (though a little expensive) restaurants and cafes. A lot of people are eating their lunch on the bulwarks during the summer days, and sometimes you can also encounter performers and artists on the narrow streets of Nyhavn, Copenhagen.

Canal Tours for all

– if you go to Nyhavn, don’t miss out on the canal tours! Get on a boat: watch and experience Copenhagen from sea level. There is a tour guide on board that will tell you all about the various buildings architecture as you pass by, and tell small stories and tales about the past of the city. This is a very relaxed and easy way to see the city. Among others you will see the Little Mermaid, the Black Diamond, the Opera and Amalienborg Palace. We highly recommend going on a tour; we always take our friends. There are two kinds of boats: DFDS Canal Tours and Netto-Boats, they both last about on hour. The Netto-Boats are cheapest and there is a little difference in standards. The Netto-Boats only take cash. Check out the external links for morecopenhagen travel guide and information.

We recommend walking from Nørreport Station (get there by S-train or buses) – alternatively if you are close to the Metro, take that to Kongens Nytorv Station. From there it’s only a 15 minute walk down Gothersgade towards the inner city and past Kongens Nytorv (King’s New Square) to Nyhavn, Copenhagen. You can’t miss it.

– looking all the way back to 1671 – 73, Swedish war prisoners dug out the soon-to-be new canal of Nyhavn in Copenhagen with a depth of more than 3 meters, 400 meters long and a little over 20 meters wide, you can imagine how long time it must have taken those poor neighbors of ours. Of course, back then there were nothing like today’s laws on Prisoners Of War, and it was a great alternative to spare your own men and soldier’s strength. And now don’t think we Danes are brutes (well, we are Vikings, but still..) other examples of using war prisoners and slaves as work labor include the pyramids in Egypt and the Bridge over River Kwai in Thailand.

The colorful houses on the north side of the canal, which are also the side with most sun during the day, has always been more popular with the visitors, and theses characteristic facades match the waterfront beautifully. The oldest house in Nyhavn dates back to 1661 (Number 9). Over the years, a lot of famous Danish people have lived in these houses, and most notable is Danish author Hans Christian Andersen who lived in three different houses in Copenhagen (number 20, 67 and 18) for more than 20 years during his lifetime.

The Memorial Anchor was raised and inaugurated in 1951, in honor of the Danish officers and sailors from the Royal Navy that lost their lives during World War II. Every year at Denmark’s Liberation Day (May 5th, 1945) a ceremony is held to honor the fallen.