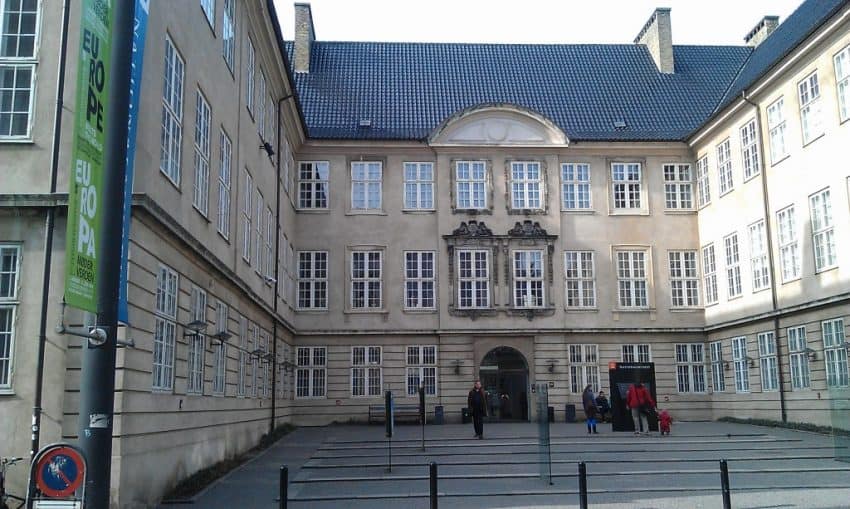 To find the National Museum in Copenhagen, consisting of almost 100,000 square floor meters, go from Town Hall and Strøget just a few hundred meters and you get to Stormgade from where you can see the back of the big complex, consisting of pillars and holding a corbel that forms a walkway for pedestrians.

From the entrance hall with the glass roof, you can visit the different exhibitions and facilities. The recommended route through the National Museum is through the glass corridor, accessing through the 23 rooms in chronological order – starting at the ancient Rune Stones.
This great exhibition displays prehistoric Denmark from around 15,000 years ago, and all the way up to the days of the Vikings.
Toddlers and kids have a play-room when you go left from the entrance hall.

Be sure to visit the old Prince’s Mansion, which once housed the Royal Family – and have almost been preserved since then.
Other exhibitions to mention are the Royal coin and medallion-collection, the ethnographic collection, Egmonthallen (the Egmont Hall), and the main party and ball room.
The Egmont Hall is a display that changes with different themes. At the moment you can experience ‘Europe meets the World’ until June 3rd.
The party and ball room also have different events happening from time to time. A few years back, they were the site for a well-visited masquerade party. In a museum!

Across the complex you can find ‘Klunkehjemmet’, which is a Danish expression for Victorian era (1837 – 1901) in among others culture and architecture. This apartment, or we should more appropriately call it an estate, consists of 16 rooms and gives a vivid glance into the life if an upper class Copenhagen family lived and furnished back in the days.

History of the National Museum

We recommend walking from Copenhagen Central Station. From there it’s only a 5-10 minute walk towards the Town Hall – and turning right after going past this. You can’t miss it.

Where the National Museum resides now lies at the bottom of Stormgade, which was the site of the Swedish invasion of Copenhagen during the Dano-Swedish war. Øresund (Oresund) was filled with to create the artificial islands we know as Frederiksholm (around Christiania) to avoid such further attacks after the war. Nicolai Eigtved, who also designed Amalienborg Palace, was a Danish architect and Royal Building Master who got the job to design a palace for the soon-to-be King Frederik V. Inspired by the French rococo he was the first to implement that building style in Danish architecture. And both with Amalienborg and the Prince’s Mansion we must say he did a mighty fine job! These are true feats for the eye, and are among the most beautiful buildings in Copenhagen.

In the 1850’s the Danish historical collections moved into the now state-owned buildings and started preparing for Copenhagen’s coming new cultural building.
Some years later in 1892 the National Museum opened up for the public, and the Royal collections was now for everyone to see. Through the 1930’s more wings were added to the building, and in the mid-late 1980’s to 1992 more expansions were added and completed.

Today you can reach the main entrance located on a side street to Vester Voldgade, around 200 meters from the Town Hall, which also intersects with Frederiksholm’s canal on it’s way into Christiansborg Palace surrounded by the canal.
Be sure to combine a trip for both of these sights, both connected to the long history of the Royal Family. Christiansborg Palace is also the original castle of Copenhagen, where Absalon resided during the mid-medieval times. The government resides here on Christiansborg Palace today.