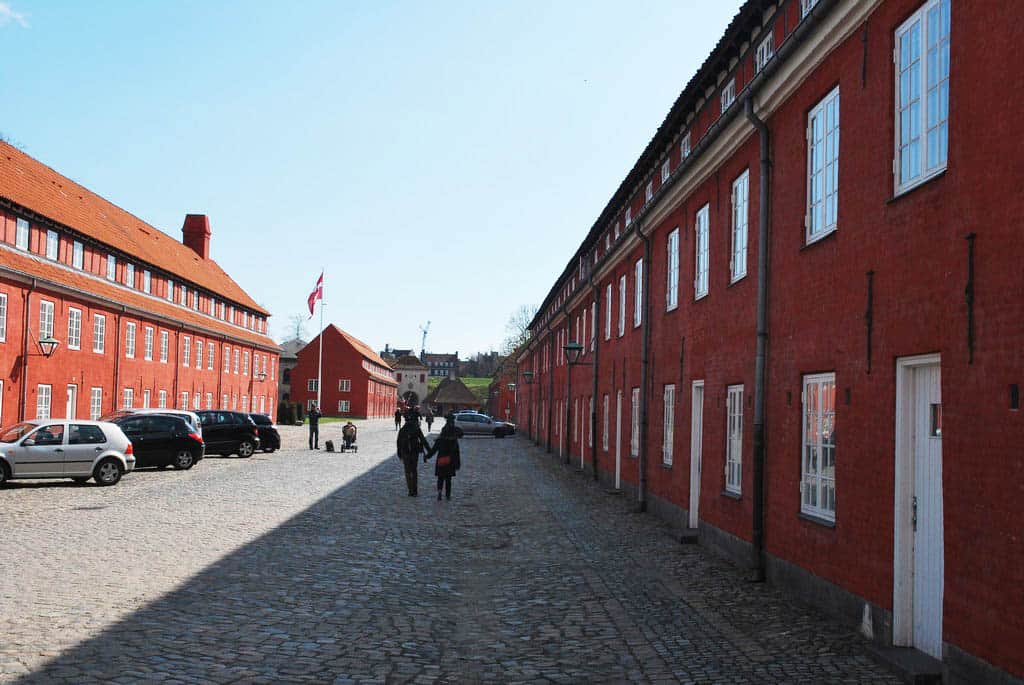 Today Kastellet is used mainly for military purposes, and houses many different organs in the middle of Copenhagen. Here we have the Defence Judge Advocate Corps, the Defence Intelligence, the Danish Home Guard, and it is a symbol of the old Danish military traditions. It is guarded by the Royal Guard, just like Amalienborg and Rosenborg Castles are, but here they are wearing their green uniform, and are not as many people on duty as those other places.

There are many old buildings in Kastellet, dating all the way back to 1704 and still standing today. Only the vegetation have been trimmed, and the buildings been restored a few times over the years.
Built as an old fortification of Copenhagen, it has the shape of a pentagram with bastions at the tips – ready to defend the capital. That shape as been preserved, but around it Langelinie, Østerport Station, among others, have been expanded over the years, which have removed some of it’s exterior grandeur. Interior-wise, the inhabitants been changed around a bit and today Kastellet doesn’t house dangerous criminals anymore..

Take a stroll down the main street, and if don’t pay attention to the parked cars you can almost picture yourself a couple of hundred years back in time, to 1750 Copenhagen. The houses provide a special atmosphere, and are very charming in the national colors. We can also recommend you to take a walk (bicycles are not allowed) on the 20 meter high ramparts surrounding the military base, that began construction under Christian IV’s rule, some decades (back to year 1664) before the first buildings. Oh, and don’t walk or sit on the grass, or the guys in uniform will…. tell you to move.

The great Commander’s House, the big yellow one in front of the church, has been the home of the Commandant of Kastellet since 1725, and today houses the Danish Chief of Defense. It is a beautiful Baroque style house in amazing surroundings. Location, location, location.

And not to mention – this is also a favored running site for many active Copenhagen people.

Monument of the Danish International Effort in War

In one of the corners – at the Princess’ Bastion in Kastellet’s northern end you can also visit a newly designed monument that honors our fallen, and everyone who have been inflicted by war and the Danish effort since 1948. Pay your respects if you feel like it, and hope the families left behind are doing good.

It was inaugurated in September 2011, at a rainy ceremony in which among other the Queen, Crown Prince, the Danish Chief of Defense, and many other participated. If you are a military enthusiast, any other way interested, or are just a curious soul – Danish commentary where you can find the opening ceremony in a 68 minute long video.

Combine this trip with the Changing of the Guards at Amalienborg Palace – Kastellet is just a few hundred meters away! We recommend walking from Amalienborg Palace, north out of. You can get from the station to Amalienborg within 20-30 minutes on foot. Else take the S-train system (see our Transportation guide) to Østerport Station and you can see it from there (there are also signs).

Fortification of Copenhagen with Kastellet

As a central part of Copenhagen’s old bastions, Kastellet served as a main fortification of Copenhagen from northern invaders. Today it is a well kept series of bastions once built to protect still stand to this day, and give us a good view into Copenhagen’s past, and how the city was defended. From Kastellet, the ramparts stretched all the way around what we today know as the Inner City, around Christiansborg.

Though, despite it’s size and glory, Kastellet was beaten and the English won with their great fleet back in 1807, proving time had outpaced the once modern defenses.
Back in it’s original state this great complex stretched as far as today’s Nørreport Station close to the lakes with it’s embankments and ramparts separating the citizens from the hordes, and provided great defense to Copenhagen from land attackers.
All the soldiers that have been guarding the citadel, were placed to live in the barracks – the long red buildings along the main street – while they served their draft time, or just regular days honest work.

Kastelkirken, the Church of Kastellet

The church was built for the citadels soldiers, and the main door was only used for the officers – while the privates had to use the side entrance. It wasn’t until in 1902 the public was allowed to visit, and civilian churchgoers were permitted. Today only people living in the few streets around Kastellet, and people working in the military can be married in Kastelkirken (Church of Kastellet).

Behind the church is a beautiful post mill that is one of the two last standing (of the total of 16) wind mills that was placed on the ramparts of Copenhagen to provide the citizens with food during sieges. It still works today, but isn’t being used.

If you want, you can apply for a fishing license (free) at the Guard’s building at the southern entrance closest to the Inner City and Nyhavn, which makes you eligible to see if you can catch one of the fish in the basin. Bring your own equipment though.