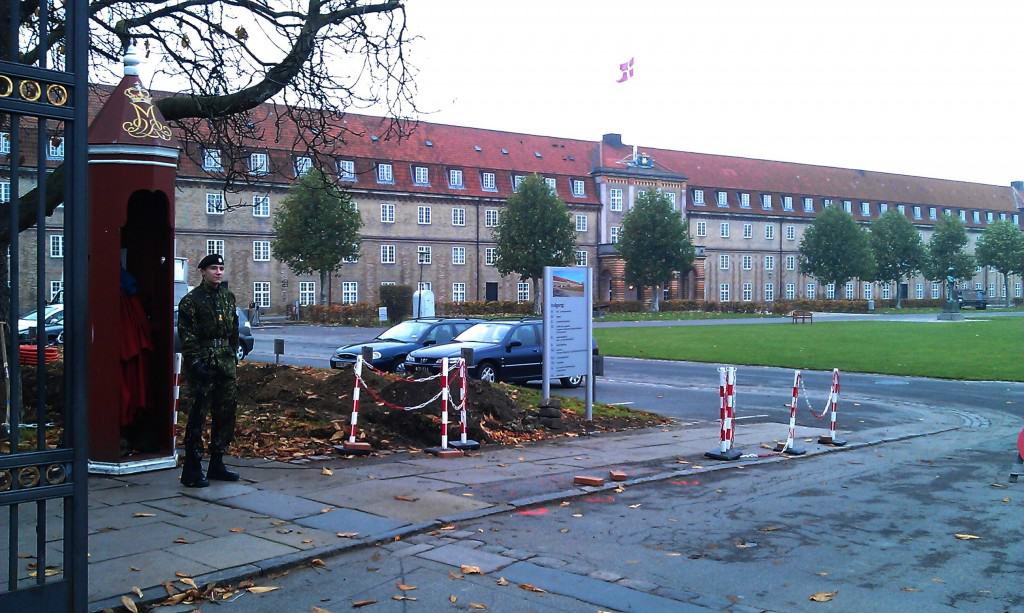 Have been protecting the Danish regents, both in Copenhagen and other cities, for more than 350 years, since the regiments creation during the Dano-Swedish War in 1657 – 1658 as the King Frederik III’s personal regiment of bodyguards.

Originally the Royal Danish Guards they were quartered on an other set of barracks just a few hundred meters away on Sølvgade, but when the King Christian V was not using his vacation home on Gothersgade in Copenhagen next to Rosenborg any more, the Royal Danish Guard assigned an Architect with the remodeling and building of the orangeries and vacation home into at the time modern barracks. The outcome of that, is not far from what we see today.

serve for a total of 8 months – with the first 4 months of duty in the field with regular combat training, first-aid training, among others. After their last tests and exercises, called their ‘REX trip’, they advance from Privates, and are named the Danish term ‘Garder’ (Royal Guard), which makes them eligible to stand guard at either Kastellet, or the Barracks on Gothersgade, where they at both locations are wearing their green uniform, or they can be assigned to ‘Blue Shift’, and have to guard Amalienborg – or one of the other Palaces and Castles around the country, where the Danish regents reside in that given period. That can be both in Aarhus or in Fredensborg.

A Danish Royal Guard has shifts for 24 hours per team – and on each shift they are divided into three sub-shifts, either 1st, 2nd or 3rd substitution. They then stand guard for 2 hours, and are in emergency response the next 4 hours until their shift is up again. Usually the guards sleep for 2-6 hours during a shift (6 is they can fall asleep instantly, and their service are close to an end).

We recommend walking from Kongens Nytorv or Nørreport Station, to the nearby barracks located on Gothersgade. If you stand on Nørreport you can see the fences and the big barracks, that lies parrallel to the roads going north from Nørreport. From Kongens Nytorv, go in opposite direction of Nyhavn down Gothersgade, and past King’s Garden.

Both before, after and during their shifts, the Royal Danish Guards have to maintain their equipment – and get ready to clear the strict, high standards it requires to go on a shift:
Working on their equipment, they can easily spend many kilos of Kiwi Shoe Polish as they make everything shine! A total of 60-90 hours are spent preparing and maintaining their bags, 20-40 hours on their shoes, 10-20 hours on their saber sad, and lastly around 20 hours only polishing the brass on their saber and sad. Other than that, all other equipment and clothing must be prepared and in perfect condition – the pants must be freshly squeezed, the bear-skin hat steamed and combed, and the buttons on the jacket needs to shine as well.

are divided into a total of three teams, that each are on a shift for 24 hours, with changing of the guards every day at 12:00 (Amalienborg), with departure from Gothersgade Barracks in Copenhagen at around 11:30. Be sure to check out the parade, especially in the Spring and Summertime, where the Queen resides on Amalienborg (usually February – May). With the regent home at Amalienborg, the soldiers are accompanied by music and their own regiments marching band on their walk through the city of Copenhagen. It is really a must see!