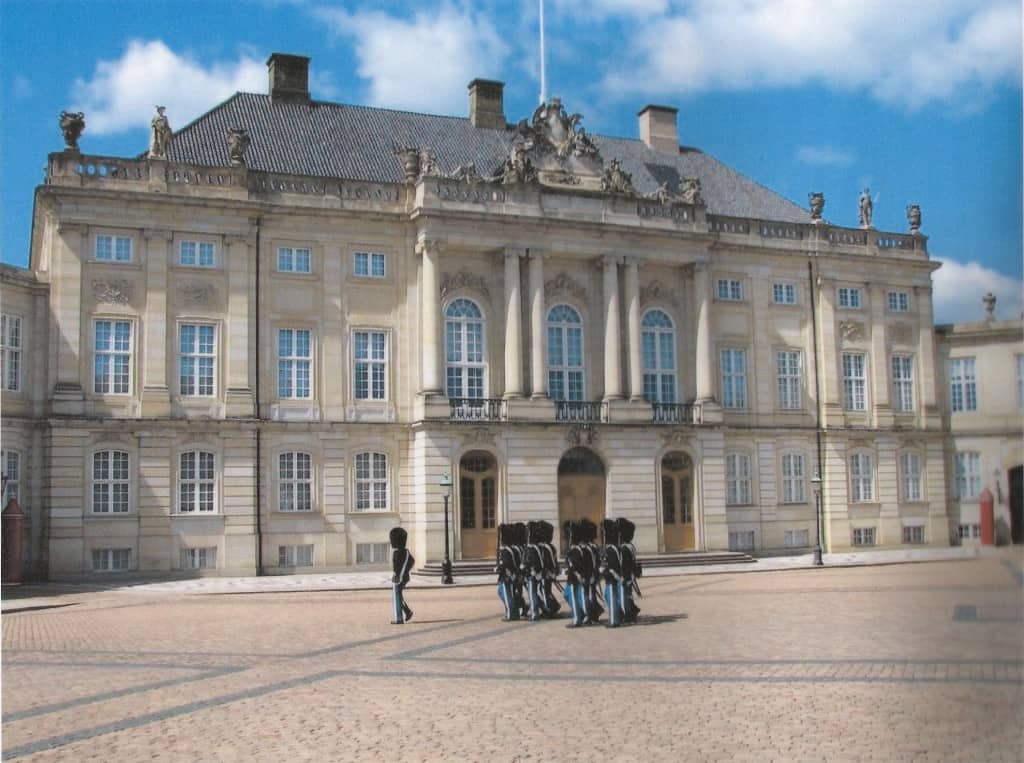 Was part of a whole new district that was constructed in Copenhagen, and that we today know as Frederiksstad from Kongens Nytorv (King’s New Square) to Kastellet. This new district was designed and built to celebrate the House of Oldenburg’s 300 year anniversary of their monarchy, during a total of 400 on the Danish throne. The work went on for 10 years, from 1750 – 1760, and the facades were almost identical with their 2½ stories and majestic look in rococo style building. Originally built as homes for the four most noble families in Copenhagen at that time, it fell in other hands during the years.
Royal Building Master Nicolai Eigtved was appointed by the King as the Lead Architect, but the Lord Chamberlain, Count Adam Hottlob Moltke was the real driving force behind the buildings, and the originally named ‘Palace of Moltke’ was the first of the four rococo style buildings that were completed.

When Christiansborg Palace burnt to the foundation in 1794, the Royal Family was without a place to live, and purchased two of the four Palaces that was Amalienborg. The columns and the walkway that connects two of the Palaces are actually built of wood with a concrete layer as disguise! It’s original intent was to make the regents move between their two palaces, without the curious eye of, and interaction with the public

We recommend walking from Nørreport Station. You can get from the station to Amalienborg within 20-30 minutes on foot, but if you want the full experience, we recommend watching and following the Royal Guard when they begin the changing of the guards from their barracks, at Gothersgade next to Nørreport Station.

were ever since preferred by the Royal Family over their original palace, Christiansborg, and today they are still using it most of the year! The two Princes, H.R.H. Frederik and H.H. Joachim have their own separate Palaces, where the last two are used as the both the Queen’s residence, and the last as a guest house where New Year’s Ball with the regents are held.

The Royal Guard, which was created in 1658, of course followed the monarchs when they decided that they wanted to stay at Amalienborg instead of Christiansborg, and they have since then stood guard at the courtyard and been one of the last lines of defense to the Danish monarchs.

This Castle, consisting of four individual Palaces are a beautiful place to visit. The buildings majestic rococo facades, which due to Nicolai Eigtved’s overall plans for the Amalienborg-complex are almost identical among the four, are are on the most successful buildings of it’s kind and style in Europe, and are today a perfect setting in modern Copenhagen for today’s Danish monarchy.
We recommend you visiting Amalienborg Palace between 11:30 – 14:00 because seeing it’s not possible to visit the interior of the palaces you might as well have some action along with looking at the buildings. So if you want to see the Guard change shifts, be there at noon (12:00)! Every second hour from 12:00 there will also be a small rotation of the guards.

Taking a look down Frederiksgade, from beyond the Statue of a Riding Frederik V in the distance you can spot the Church of Marble, also known as the Church of Frederik, which is also worth a visit when you are in the area – and in Copenhagen!